Offering to the Spiritual Guide 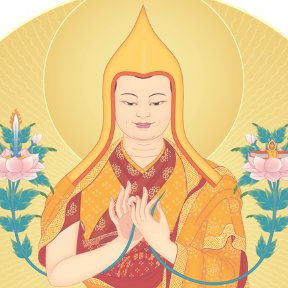 For Buddha’s Return from Heaven Day.

Offering to the Spiritual Guide, or Lama Chopa in Tibetan, is a special Guru yoga of Je Tsongkhapa in conjunction with Highest Yoga Tantra. It was compiled by the first Panchen Lama, Losang Chokyi Gyaltsen, as a preliminary practice for Tantric Mahamudra. The main practice is meditation on reliance upon our Spiritual Guide, but it also includes all the essential practices of the stages of the path (Lamrim) and training the mind (Lojong), as well as both the generation and completion stages of Highest Yoga Tantra. By relying upon our Spiritual Guide as one with Je Tsongkhapa, our compassion, spiritual power, and especially our wisdom will naturally increase.

For a more extensive explanation of this practice, see the book Great Treasury of Merit.

This puja uses the prayer booklets Offering to the Spiritual Guide and Prayers for the Long Life of Venerable Geshe Kelsang Gyatso Rinpoche.

About Buddha’s Return from Heaven Day

September 22 marks the celebration of Buddha’s Return from Heaven Day.

The following explanation is an extract from a talk given by Venerable Geshe Kelsang Gyatso on this day in 1991:

On this day we celebrate Buddha’s return from the desire god realm called Land of the Thirty-three Heavens, where he had been to visit his mother who had been reborn there.

Traditionally this day also marks the end of the summer retreat. Every year, during the summer months, Buddha did a three-month retreat with his disciples. His reason for doing this was to avoid harming insects and other animals. If we go out a lot during the summer months we will naturally kill more insects and other animals than at other times of the year. The nature of Buddhadharma is compassion – an unbiased compassion that is not just for human beings but for every living being, including animals.

In fact, we should have stronger compassion for animals than for human beings because animals suffer more. Human beings have better conditions and are more fortunate than animals. Because animals have so much suffering and no freedom, out of compassion Buddhists should try not to kill or disturb them. So, for three months during the summer, Buddha advised his disciples to retreat, staying always inside and living carefully and conscientiously.

One year during the annual summer retreat Buddha went to the Land of the Thirty-three Heavens. After his mother died she had taken rebirth in this god realm, so-called because it has thirty-three different types of gods.

The king of this realm is called Indra. The Indra who was king at that time was also Buddha’s disciple and he invited Buddha to go there. So Buddha went to benefit his mother and also, at Indra’s request, to benefit the other gods living there. He stayed three months, and then returned on this day.

This day is therefore very special. It is said that if we engage in any kind of virtuous action on this day it becomes especially powerful and our merit greatly increases. For example, if we offer one single light offering this action is multiplied to become millions of light offerings.

On this day we should especially remember Buddha’s kindness.

We now have the chance to abandon our self-grasping, which is the source of all suffering and problems. We have the wisdom that understands what self-grasping is, how it harms us and how to abandon it. All this knowledge and all our wisdom realizations come from the kindness of Buddha Shakyamuni.

All Je Tsongkhapa’s books are commentaries to Buddha Shakyamuni’s teachings. They help to clarify them and make it easier for us to understand them. Nowadays human beings are very intelligent and knowledgeable about how to develop and produce external things, but their understanding or wisdom about the profound Dharma of the inner spiritual path is very poor and weak. Je Tsongkhapa made it very easy for us to understand this. He clarified everything and made it easy for us to integrate all of Buddha’s teachings in a very practical way.

In reality, every teaching we study and practise comes fundamentally from Buddha Shakyamuni; all our wisdom that understands Dharma comes from his kindness. Realizing this we should dedicate all the virtues we accumulate today to fulfilling his wish.

What is Buddha’s wish? His main wish is that his teachings flourish throughout the world so that all living beings find release from the suffering ocean of samsara and attain permanent inner peace, permanent freedom, and eventually great enlightenment. Because the real method to find release from samsara is to practice Buddha’s teachings, unless they flourish in this world it is impossible to attain actual liberation.

Buddha doesn’t need anything for himself because he has completed everything – he has fulfilled all his personal wishes. His sole remaining wish is that living beings attain liberation and enlightenment through practicing his teachings. In other words, his wish is for pure Buddhadharma to flourish throughout the world to free all living beings from every kind of problem and suffering.

We should therefore dedicate all the virtues we accumulate today for this purpose.